June 21, 2009
Enjoyed my day in Berkeley yesterday at the Craigslist Foundation Bootcamp 2009. They had more than 1000 folks show up to talk about service, nonprofits and social action. I thought Arianna Huffington did a good job as the opening keynoter hitting on the service theme. Announcing All For Good was a big piece of the event, of course.

Randi Zuckerberg of Facebook had the tough gig of presenting a lunch keynote outside under a tent in lower Sproul Plaza (mucho noise and people talking). She was much more on Facebook marketing message, but of course that's her role at FB. Lots of enthusiastic FB users in the audience helped make her points. 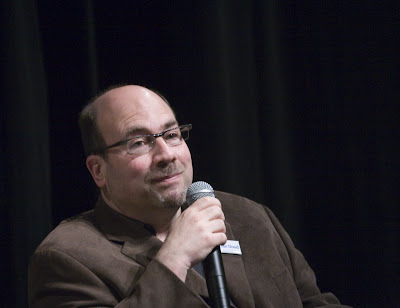 I took a lot of pictures, but not that many turned out. Posted the best 30 or so on Flickr: got some great ones of Steve Wright of the Salesforce Foundation.

I enjoyed some of the breakout sessions, although the number of concurrent sessions (often 8 at one time) made it hard to pick. Enjoyed Deb Jospin and Shirley Sagawa discussing the Charismatic Organization, their recent book.

And, as always, great to see people I know and admire like Darrell Hammond of KaBoom!, Ami Dar of Idealist.org and Jonathan Greenblatt of more cool things than I can shake a stick at!
Arianna charismatic CLFBC09 Craigslistbootcamp facebook Newmark Zuckerberg