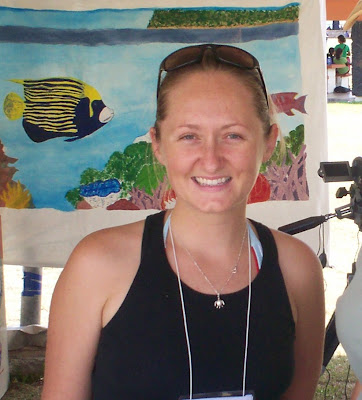 Elaina is using Miradi to develop and monitor her “Pride” campaign which addresses the social and economic factors that create environmental threats to Guam’s coral reefs. Rare’s Pride campaigns are two-year marketing initiatives that shift the attitudes and behaviors of people living near endangered areas to engage them in conservation efforts. Rare has embedded core Miradi functions into their standardized marketing methodology which is used to design conservation campaigns in 50 countries. Rare, which is based in Arlington, Virginia, uses Miradi in all its worldwide campaigns to promote biodiversity and has translated the Miradi software into Bahasa Indonesia, Mandarin and Spanish.

Elaina learned how to use Miradi while working on a Guam watershed plan with CMP member The Nature Conservancy. Now she’s a Special Project Coordinator for the Guam Bureau of Statistics and Plans Guam Coastal Management Program where she uses Miradi to prioritize threats to Guam ecosystems. Miradi helped Elaina determine that sedimentation due to wildfires is the main threat to reefs in Guam’s Sella Bay and Cetti Bay. The software’s diagram component, results chains, conceptual models and threat ratings allowed her to carefully analyze the impact of wildfires on sedimentation and water quality in these areas.

Once Elaina identified the primary threat to the reefs, Miradi helped Elaina to create a campaign project plan for Guam that aimed to increase the percentage of branching coral species by reducing the number of fires on the island. The campaign, which is currently underway, protects coral reefs in Southern Guam by influencing local communities to prevent and report wildland fires in order to reduce harmful sedimentation.

“We can identify threats and priorities and write a management plan with threat rankings that gives us the ability to say where the funding should be focused on first,” Elaina told us. “By using the concept models for the watershed plan, we can be comprehensive and see what other projects we should be engaged in and other organizations that should be involved.”

Elaina says that Miradi helped her determine what knowledge was needed by local residents to adopt behaviors that promote clean water. In addition to teaching the community how wildfires contribute to water pollution, Elaina concluded that hunters on Guam should also be shown how to use bait to attract deer instead of relying on fires to flush them out. Miradi’s threat ranking and results chains illustrated how reducing fires set by hunters - and encouraging the community to report these blazes - would help decrease sedimentation and improve water quality. Elaina also proposed the introduction of a hotline for community members to report fire violations and a fire violation citations program.

According to Elaina, halting fires and sedimentation on the reefs is especially critical because the U.S. military plans to move 9,000 Marines from Okinawa to Guam in the next five years and the island’s population is expected to increase by 30%. Given the time pressure, Elaina uses Miradi to develop strategies that can be monitored for effectiveness. She says that one of the most important benefits of Miradi is that it allows environmental planners to make the best use of limited resources. “Sometimes we are so spread thin, that focusing in on one factor chain or one target or one threat or one strategy is so useful to us,” she says. “We don’t focus on threats where the solutions are not effective and we make the best use of time, resources and energy.”

Elaina says that she will know that the campaign is having an impact when there is increased discussion about hunters and wildfire prevention and the reduction of arson-induced wildfires, devegetation of watersheds and sedimentation. Her campaign is seeking a 50% reduction in illegal fires or arson by this year and a 10% reduction in watershed sedimentation by 2012. To reach these goals, Elaina’s plan advocates planting at least 20,000 seedlings over 18 acres in the Piti and Asan watershed area and the creation of community watershed monitoring groups.

In addition to identifying environmental threats and solutions, Elaina says Miradi helped her determine that people in the north end of Guam were more focused on dump sites than watershed issues. She says this information helped her target her campaign to 50,000 people in the South region of Guam instead of the 175,000 people on the entire island. “The entire focus of our social message is to know your audience,” Elaina told us. “Knowing the areas where we are going to work allows us to be much more specialized and not waste time working in an area where our message will not be as effective. We have a limited amount of resources and being strategic and focused in the planning allows you to be much more effective.”
CMP conservation environment Guam Miradi RARE