Don’t be surprised, but we’re picking up the pace of change at Benetech! The world’s problems are many, and we keep seeing opportunities for technologists to address those problems effectively. Our team has been thinking hard about scaling positive social impact of technology work.

I want to unveil several of these new initiatives, as well as sneaking in some of the incredible things happening in our core programs in literacy and human rights.

Highlights of this Letter:

SocialCoding4Good
Just funded by the John S. and James L. Knight Foundation, our SocialCoding4Good initiative will kick off later this year. Led by Benetech’s VP of Engineering Gerardo Capiel, we will create an online space, SocialCoding4Good, where people in the tech community interested in social causes can volunteer ideas, connections, time and skills. All interested nonprofits or social enterprises will be able to leverage SocialCoding4Good by posting their open source software development projects for social change and inviting volunteers to work on them. We believe that having more minds working simultaneously on a problem increases the odds of solving that problem well and quickly. So, we’re creating a new place where techies can find social tech applications that resonate with their personal passion for change!

The best idea we received last year for a new project is getting underway! CityOptions is an environmental initiative to help local governments—particularly small and mid-sized ones—plan and execute effective sustainability initiatives. Taking into account each city’s unique situation, constraints and opportunities, this online open source software will zero in on the top strategies for meeting that city’s objectives for cost reduction, energy efficiency or reduction of greenhouse gas emissions. We also want to enable effective information sharing among agencies about what does and doesn’t work. Our goal is to revolutionize the effectiveness of local governments in responding to climate change and other environmental impacts.

Bookshare goes mobile! The number one request from our users was for an iPad/iPhone app that would enable them to easily read on the go. With our Read2Go app, Bookshare members can now search, download and read Bookshare books and periodicals on their iPad, iPhone and iPod touch devices. We’re thrilled that students and other readers who have disabilities that keep them from reading standard print can now read the same books as their peers, using the same devices.

Route 66, our online platform for teaching reading, has officially launched thanks to support from the Peery Foundation. Route 66 is software that provides teachers (and non-teachers!) with the tools to teach reading to adolescent and adult beginning readers, such as those with developmental disabilities. The key here is providing materials that are age, interest and ability appropriate. Route 66 pairs this reading content with teaching tools and learning exercises, effectively empowering any literate person to become an early reading instructor. Dr. Karen Erickson, one of the nation's leading experts in literacy for people with disabilities, invented the original concept for Route 66 and collaborated closely with us on the instructional approach and content. Being able to read is crucial for life success and independence, and we’re hoping to empower thousands of people to become readers as teenagers and young adults. 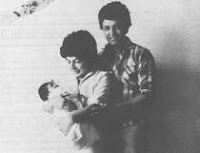 In my last Update, I wrote about our testimony in Guatemala at the trial of two policemen, charged with the disappearance of a prominent union leader. Now I can report that the two policemen were convicted and sentenced to forty years each for the disappearance of Edgar Fernando García. HRP’s statistical analysis of evidence from the Guatemalan National Police Archives, which contains some 80 million documents, has helped to establish forced disappearance as a crime in Guatemala. This is a huge legal victory! After decades of human rights work to achieve justice for the victims and families who suffered forced disappearances, this recent ruling opens an opportunity for the Guatemalan court system to address the massive human rights crimes of the armed internal conflict.

PBS NewsHour Stories
In March, PBS NewsHour published two stories about Benetech and the HRP. A lengthy broadcast segment, “To Combat Human Rights Abuses, California Company Looks to Computer Code,” noted that Benetech's Martus software is used to secure sensitive human rights data such as the type of information about abuses that have recently been documented in the Middle East. PBS’ online story, “The Panic Button: High-Tech Protection for Human Rights Investigators,” explained that Martus includes a “panic button” feature that allows users in threatening situations to delete all data and even the program itself with one keystroke.

Literacy - Major Milestones at Home and Abroad
Bookshare had promised to serve 100,000 students over five years in our major contract with the Department of Education to provide all students with print disabilities in the U.S. with the books they need for educational success. We passed this milestone in less than 3.5 years, and continue to expand rapidly. Our members are now downloading accessible books at a rate of more than one million books per year! Bookshare now has over 150,000 members and more than 125,000 books. It is the world’s largest online accessible library, adding books at nearly four times the rate of the next most prolific U.S. library that serves people with print disabilities (on less than one-sixth the budget)!

Internationally, Bookshare is operating in twenty-eight countries that span the globe and offering content in Hindi and Tamil, Spanish, French and German. Through a funded partnership with the Mada Center in Qatar, in 2011 we will pilot Arabic language capability and content, enabling Bookshare to start serving readers throughout the Arabic-speaking world.

With strong values and a commitment to making revolutionary social change through technology, Benetech is just getting started! Not only do we want to do more at scale, we want all other socially minded technologists to find their passion and make good things happen. I hope you’ll join us in growing this movement, and seeing that technology fully serves all of humanity!
Benetech Bookshare CityOptions Coding4Good CodingforGood Guatemala HFLOSS HFOSS human rights Read2Go Route 66 SocialCoding4Good