February 04, 2012
Geeks are textbook early adopters. We can't resist a new gadget, or pushing the envelope to find out what's really possible!

I'm no exception to this rule. Recently, our family took delivery of a new Nissan Leaf, a completely electric vehicle. I now breeze by gas stations with $4 per gallon prices and think how I'll never pull into one of these places and spend dozens of dollars to fill up.

Of course, the downside to all-electric is that when your battery runs out, you don't have a little gas engine to get you home. This causes range anxiety, which is the fear of being stranded on the side of the road because of exceeding the range of the battery charge. 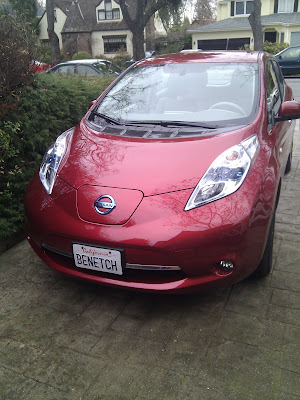 The Leaf range display is somewhat twitchy. It's trying to predict how many miles you have left in your range (as a one-way measurement), depending on battery charge, your driving habits, speed, temperature, use of climate control and so on. As a geek, I knew that the engineers designing the Leaf would design in a safety factor in this display. So, I had a lingering question: how far can you drive a Leaf beyond when it says it's out of juice?

Recently, I decided to test this. My wife and I had been invited to a nice party in Berkeley thrown by a great couple. Score! This was my chance to test out my theories. However, my wife, Virginia, was not enthusiastic. She was feeling that range anxiety and wasn't interested in some of the possible failure modes of this experiment.

Luckily, one of Benetech's board members, Jim Kleckner, and his wife Jennifer was also invited to the same party. Like me, Jim also went to Caltech, and his geek credentials are even stronger than mine. Jim was eager to join me in this geek quest to reverse engineer the display question by experiment. So, a deal was struck. Virginia and Jennifer would go in the Kleckner's Prius (which is a gas-electric hybrid with plenty of range) and the two Jim's would take the Leaf.

The party was great, and we stayed up in Berkeley for the night. The next morning after breakfast, Jim and I set forth to test the Leaf's range. When we started, the range display showed Palo Alto as out of reach. So, we turned off the air conditioner, and drove more carefully to try to stretch the range. Jim found another cool display option for the Leaf's power system, and we were geeking out trying different things to twitch the separate range display.

About halfway to Palo Alto, Jim did a quick calculation with his smartphone using Google Maps: he figured we would run out of juice about at the middle of the Dumbarton Bridge, the southernmost bridge over the San Francisco Bay. "Great!" I exclaimed, "we can coast home from there!"

Soon, the car started all sorts of warnings that we were running out of energy. No chance missing that we were reaching the twilight zone of our range! Low and behold, just after passing the apex of the bridge, the display flashed and our range went dark. The route mapping said we had four more miles to go: would we make it, or would we need to call our doubting spouses and admit defeat?! How much safety margin had the Leaf engineers built in?

We took the least distance route home, trying to minimize our risks. Soon, we passed by my house, where Virginia and Jennifer were still sitting in the Prius, waiting for us to show (they had gone faster because of their lack of range anxiety). We drove around the neighborhood, passing joggers and cyclists (also a group that doesn't suffer much from range anxiety), as we kept track of the miles we'd gone with no range showing on the display. Five, six and seven miles all passed as we circled the area, freely burning electrons. Finally, at the 8.8 miles, the famed "Turtle mode" icon showed up on the dashboard. While in turtle mode, the Leaf barely accelerates, trying to encourage you to seek a friendly power outlet (the car has a special 120V linking cord in the trunk, in case you need a charge from a normal outlet rather than the 240V outlets that are typically used).

I had pushed my luck while circling, and we were half a mile from my house. Would we make it? Would we end up pushing the car at the end? But, the gentle speed of turtle mode conserved the last kiloJoules of electrical energy and we glided to a stop in front of the charging station at my house. We'd made it!

Melodrama aside, many people have asked me how practical an electric car with a range of roughly 100 miles is. And for me, it's turned out great. It's rare for me to drive further away than San Jose, San Francisco or Berkeley. So, I can pretty much count on being able to make a round-trip to these destinations when I'm not taking the train into San Francisco. I've had terrible luck with public charging stations in the area: I think I'm 0 for 5 on attempts to use the existing chargers (wrong connectors, broken, or some kind of payment system other than the one that I got with my Leaf and its home charging station). But, just relying on my home charger, I can pretty much do all the driving I need to do in a day with the overnight charge. I believe electric cars are going to be a great tool for most people, especially for families with at least one other car.
auto charging electric Leaf Nissan range range anxiety turtle turtle mode

TomStretches said…
Great story. I am a Leaf peeper and occasionally read up on news of the Leaf. I live in Palo Alto and see them everywhere. But your fun story is a great living review of what it's like to use a Leaf in everyday life. And you dispel the exaggerated fears of limited range which is great. Thanks for also revealing the limited reliability of public chargers. You are clearly driving on the cutting edge right now and truly enjoying it!
8:22 PM

So 8.8 miles before turtle after no bars. I had figured maybe 10, glad you took the experiment and not me :-)

I keep an envelope in the glove box of my LEAF with various RFID cards for the charger brands in my area. They don't make it easy do they?

In the spring it will cost to use the chargers in our area, I expect usage numbers will take a dive and owners of the chargers will see the meager extra traffic they've enjoyed at their businesses all but evaporate.
12:06 PM