November 21, 2012
I just spent almost three weeks in Thailand and Laos on a combined work and vacation trip. Roughly once a year when I travel overseas, my wife Virginia puts up her hand and says “that’s the one!” So, we stretched out my visits to Bangkok, Vientiane and Chiang Mai to include some sight-seeing and, of course, shopping for Christmas presents in predominately Buddhist countries.

One of my business visits was to a long-standing social enterprise partner of ours, Digital Divide Data in Vientiane, Laos. I wrote about that visit in my last blog post: Digital Divide Data: our Partner in Laos. As I said to the DDD team, we love to make our money work twice as hard by choosing social enterprises as vendors. Not only do we get outstanding quality and value for our money, we also know that money is supporting a social objective by helping disadvantaged people build assets financially and experientially. We call it using the social enterprise supply chain. An unexpected bonus of this trip was how often Virginia and I came across social enterprises in our travels. Even cooler: several of these groups are, like DDD and my organization Benetech, Skoll Foundation social entrepreneurship awardees (known as SASEs)! In this post, I’ll just highlight these personal visits to terrific social enterprises. This Thanksgiving week in the United States, it seems timely to be thankful for the great work being done by these outstanding social entrepreneurs. And, when you travel, keep an eye out for a great social enterprise and make your money work twice as hard! 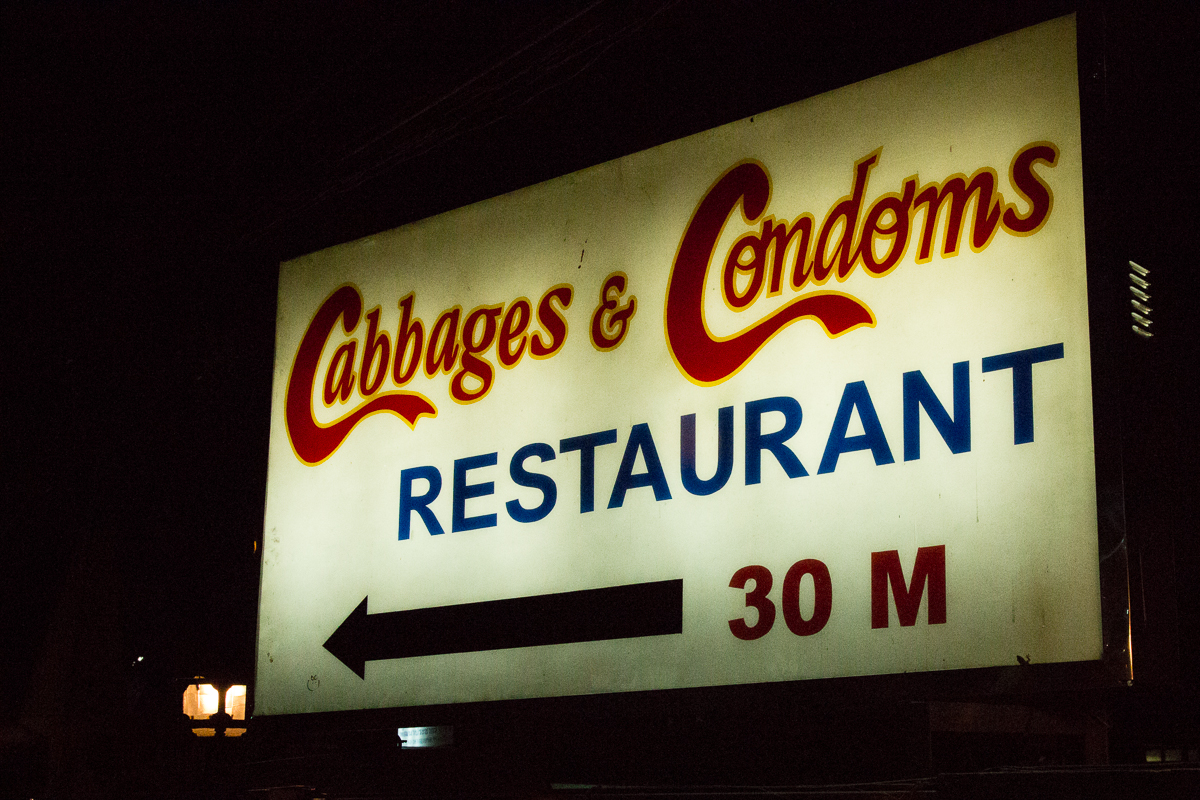 Bangkok, Thailand (and other locations).

The restaurants that guarantee that eating its food will not make you pregnant! 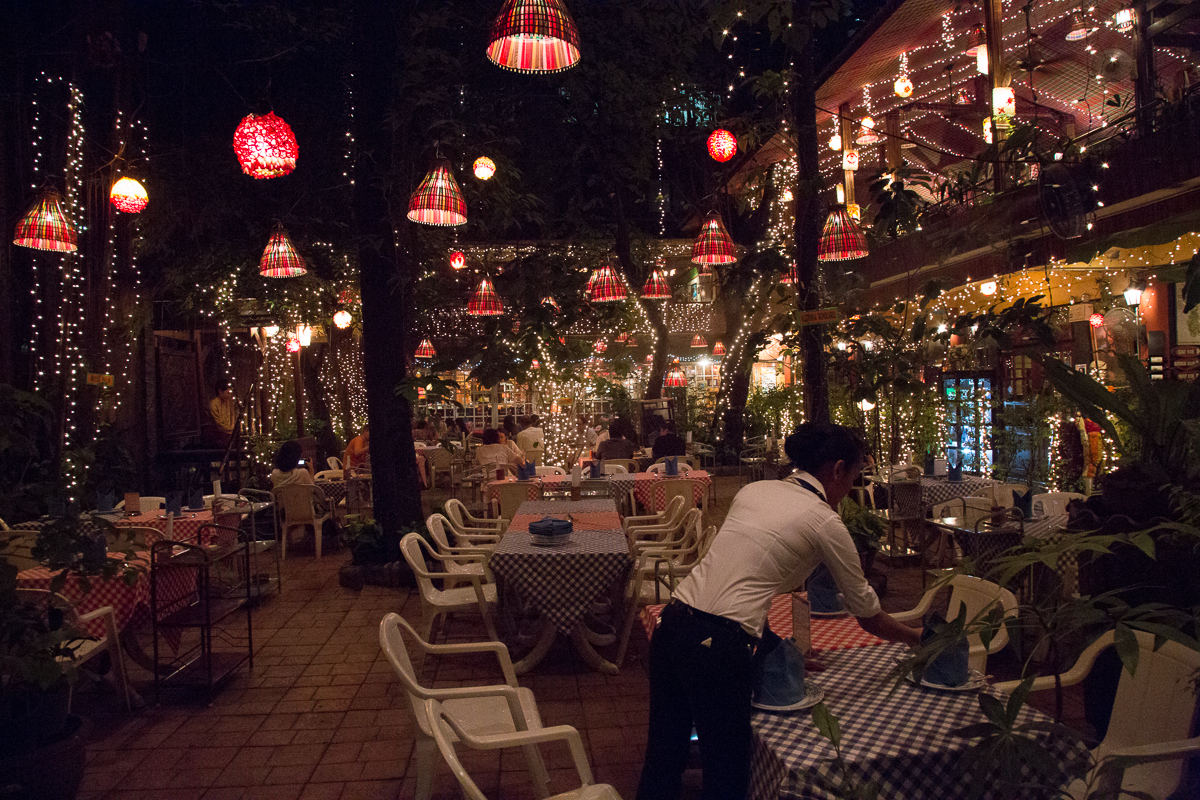 When your bill comes at Cabbages And Condoms, you get something extra: condoms as a going away present. The man behind Cabbages and Condoms is Mechai Viravaidya, 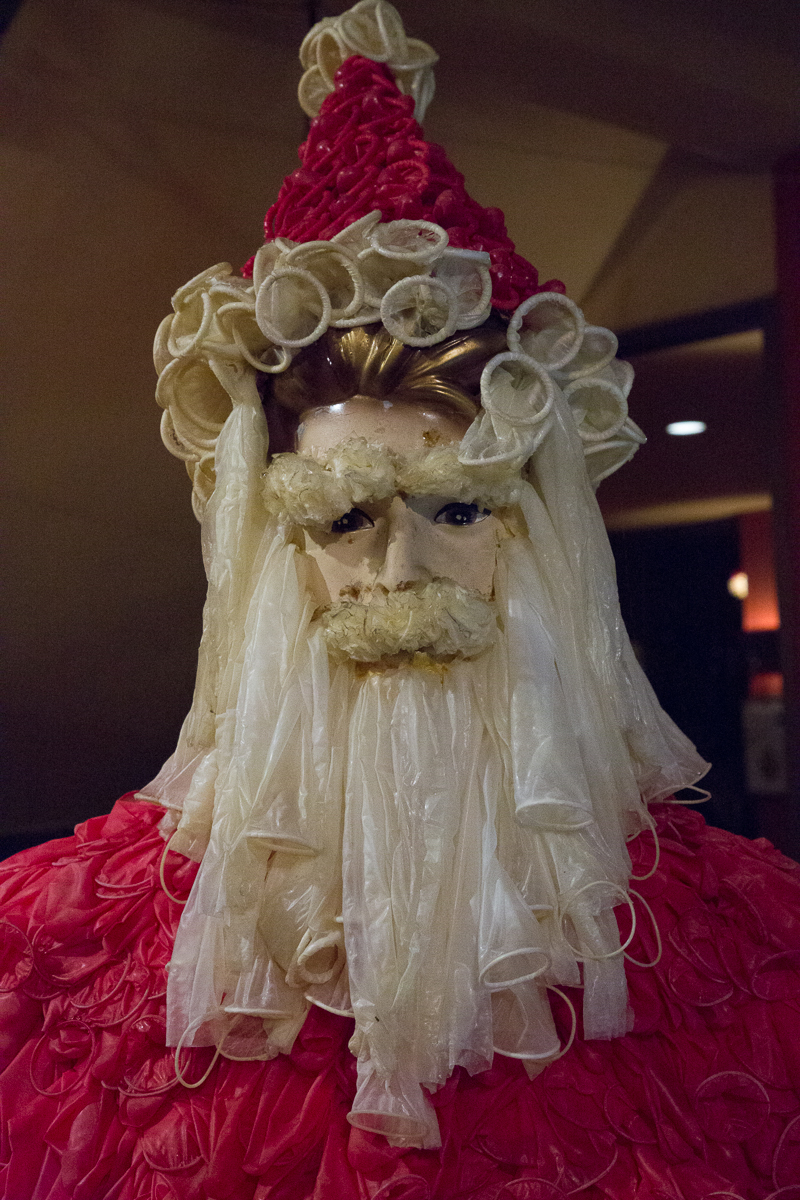 founder of Thailand’s Population and Community Development Association (“PDA”).  Mechai made birth control socially acceptable in Thailand, so much so that his nickname is “Dr Condom” in the country. PDA is also fighting HIV/AIDS and sexually transmitted diseases. In addition to great food, service and the bonus condoms with your bill, PDA’s other social efforts are also on display in the restaurant.

The gift shop features wonderful products created by disadvantaged communities that PDA works with, since poverty is a huge factor in procreation and vulnerability to disease. At this time of year, a lifesized Santa Claus made from condoms (along with Mrs. Klaus/his current girlfriend and a young boy in football jersey) greets you as you come in, as well as a giant sex ed poster. 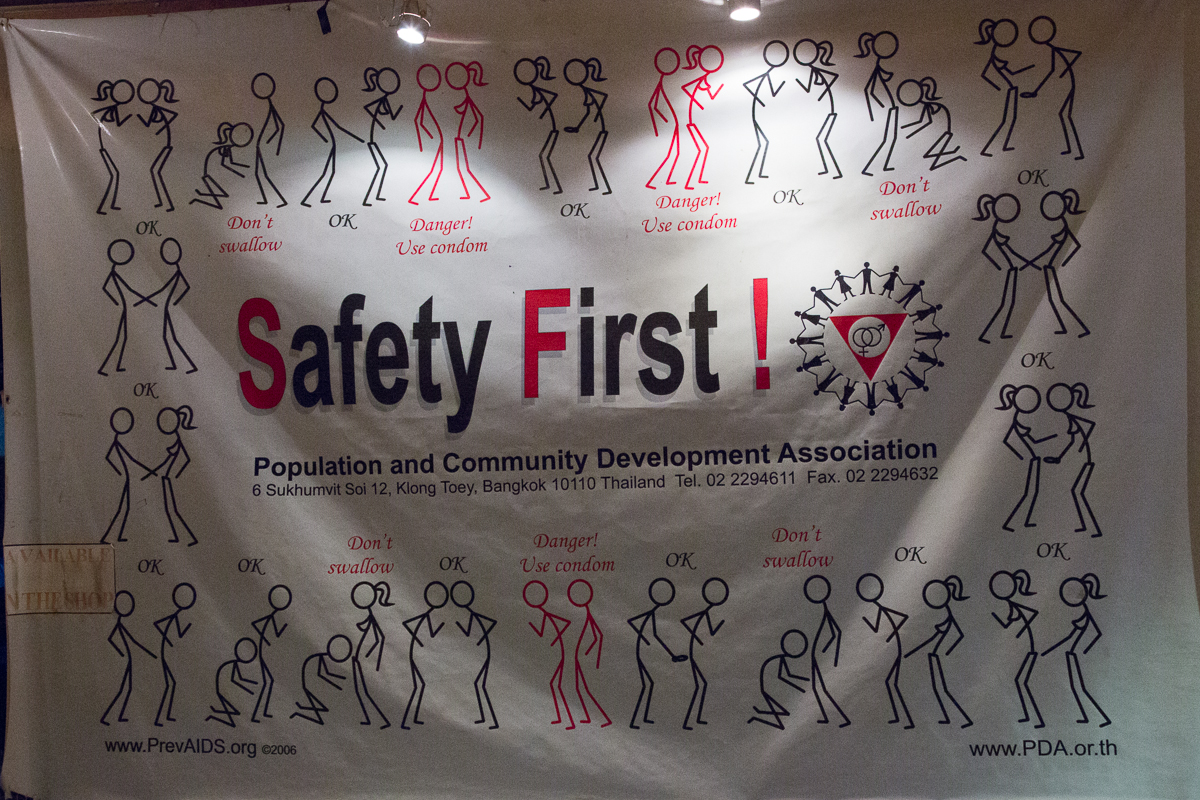 Mechai is an outstanding social entrepreneur who manages to tackle serious social issues with irrepressible humor. When I first met him a decade ago, I got “coolest dad” of the month from my sons’ friends in high school when I returned from meeting Mechai in Switzerland with keychains featuring condoms encased in plastic labeled “break in case of emergency.” It was great to see his social enterprise in operation!

Vientiane, Laos (and other locations)


Like DDD, Friends-International started its efforts in Cambodia and then spread its programs to Laos. Their goal is to help protect vulnerable children. One of their programs is to have restaurants that provide employment opportunities and skills development for street kids on their way out of poverty. After trying and failing twice to get into Makphet (“pepper” in Lao) Restaurant for dinner, we had a fabulous lunch there. Apparently, it’s the best-rated restaurant in Vientiane (maybe the country) on Trip Advisor. All of the staff have name badges identifying them either as students or teachers. There’s also a small shop attached with products, again made under some of their other development programs. We came away with one of the most beautiful cookbooks I’ve ever seen, and I know Virginia and I will be trying to replicate some of the tastes we had in Makphet. I’ve met the founder, Sébastien Marot, several times at the annual Skoll World Forum in Oxford, England. It was great to see the project in operation. Someday I hope to plan enough in advance to get dinner there!

Vientiane, Laos (as well as in Luang Prabang, Laos)

Our friends the Pitlicks turned us on to this social enterprise, which I had never heard of until we started planning this trip. I especially appreciate Big Brother Mouse because of their shared focus on access to literacy. The founder, Sasha Alyson, saw a dearth of children’s books in Laos and went into the business of publishing affordable books in Lao (and also in Lao and English). 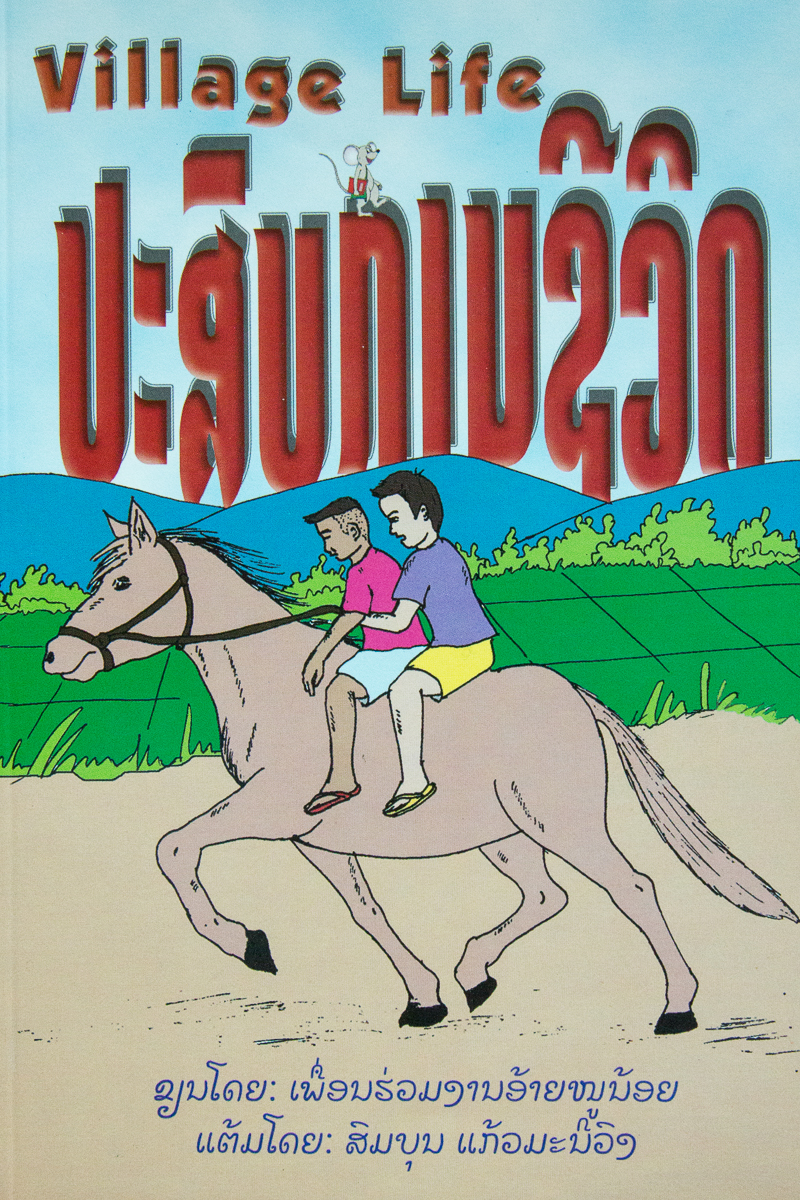 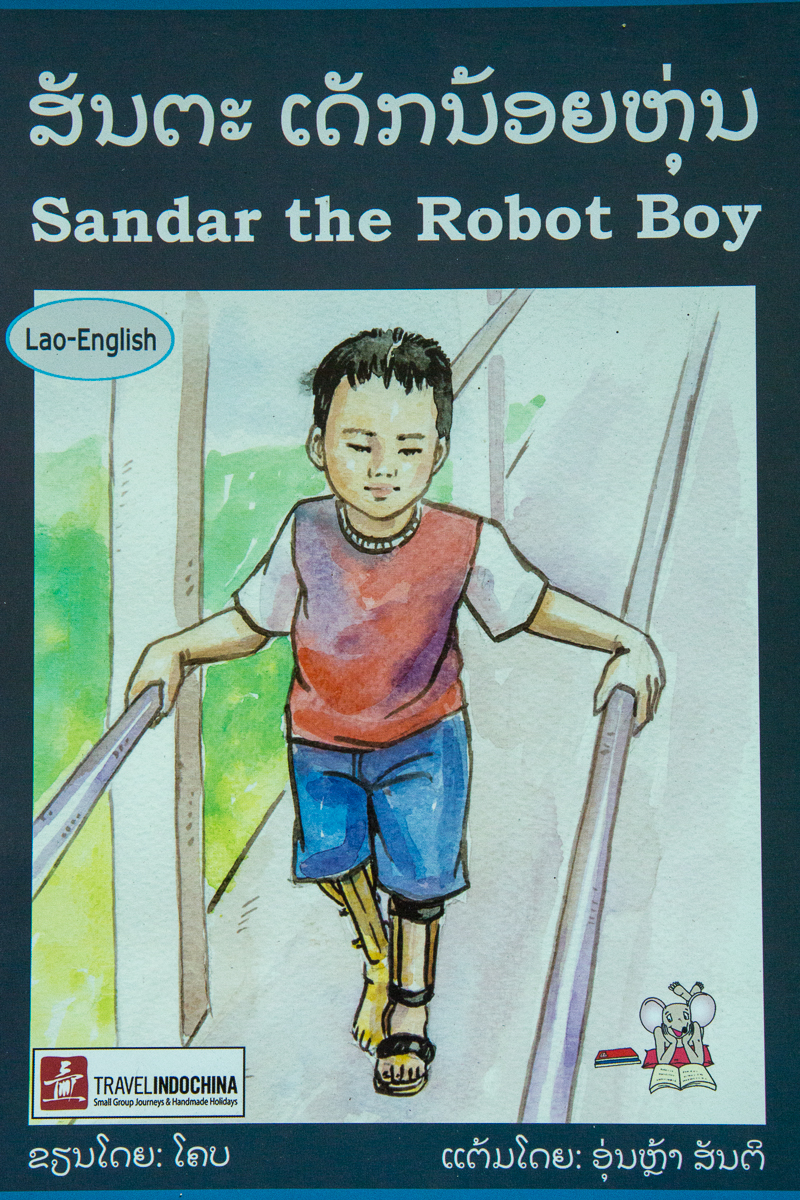 It turns out to help adults as well as kids, since many adults hadn’t seen books in their native Lao language before. Based in Luang Prabang, one of Laos premiere tourist destinations, Virginia and I tracked down their bookshop in Vientiane on the edge of the downtown area. We walked away with a handful of books, and I’ve been in touch by email with the founder: I hope we can find ways to help each other bring literacy to far more people who need it!

I was visiting Chiang Mai mainly to meet with groups working on Burmese human rights issues. Our team has been working with Burmese groups for more than eight years on human rights documentation issues, and the ND-Burma coalition of expatriate Burmese social justice and human rights groups has been one of our biggest Martus users. But, just next store to the great guesthouse we were staying in (Baan Orapin), was Sop Moei Arts. 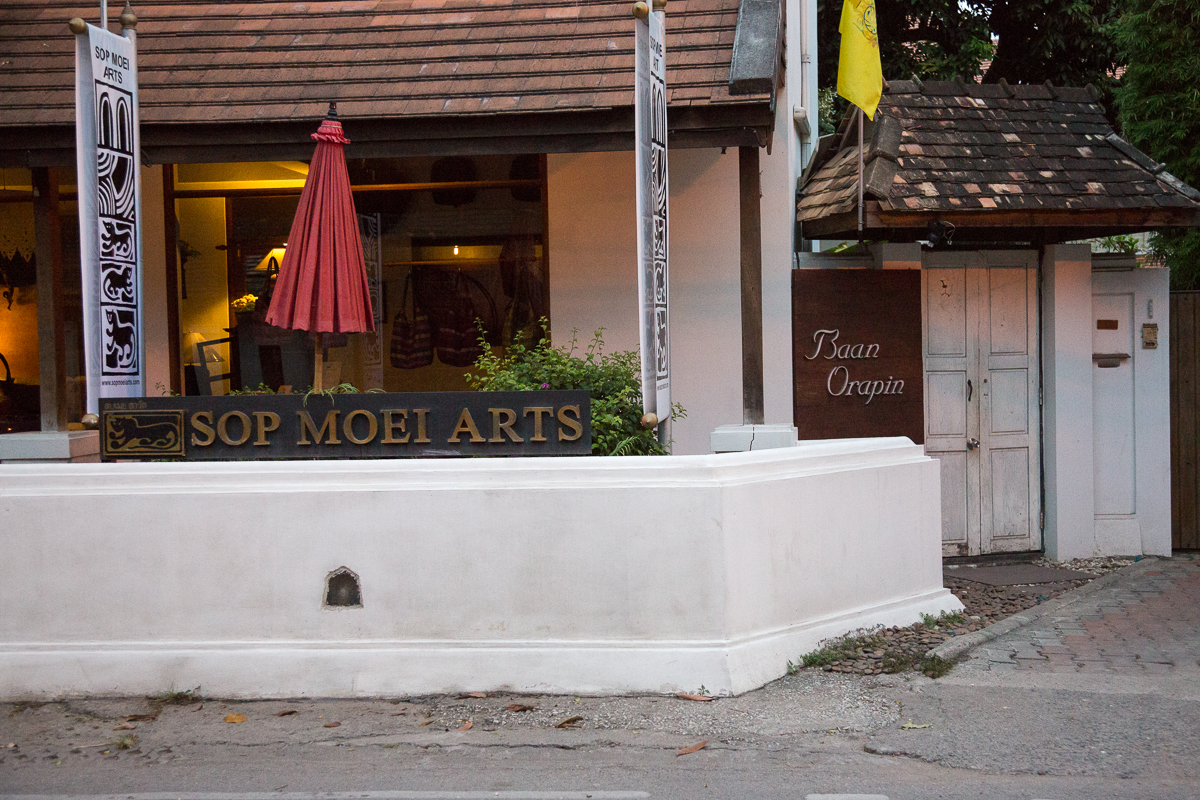 They had the most beautiful handicraft work (silk scarves and tapestries, basket weaving that seems like a different level of art than I’ve ever seen). Moreover, they were produced with techniques and skills that led to products unlike the millions of examples of mass produced products we saw in the tourist markets. One of the founders, Kent Gregory, was in the shop, and we ended up talking for most of an hour about the work. He came to a remote village in Thailand as a public health worker with a plan to fight disease and malnutrition. 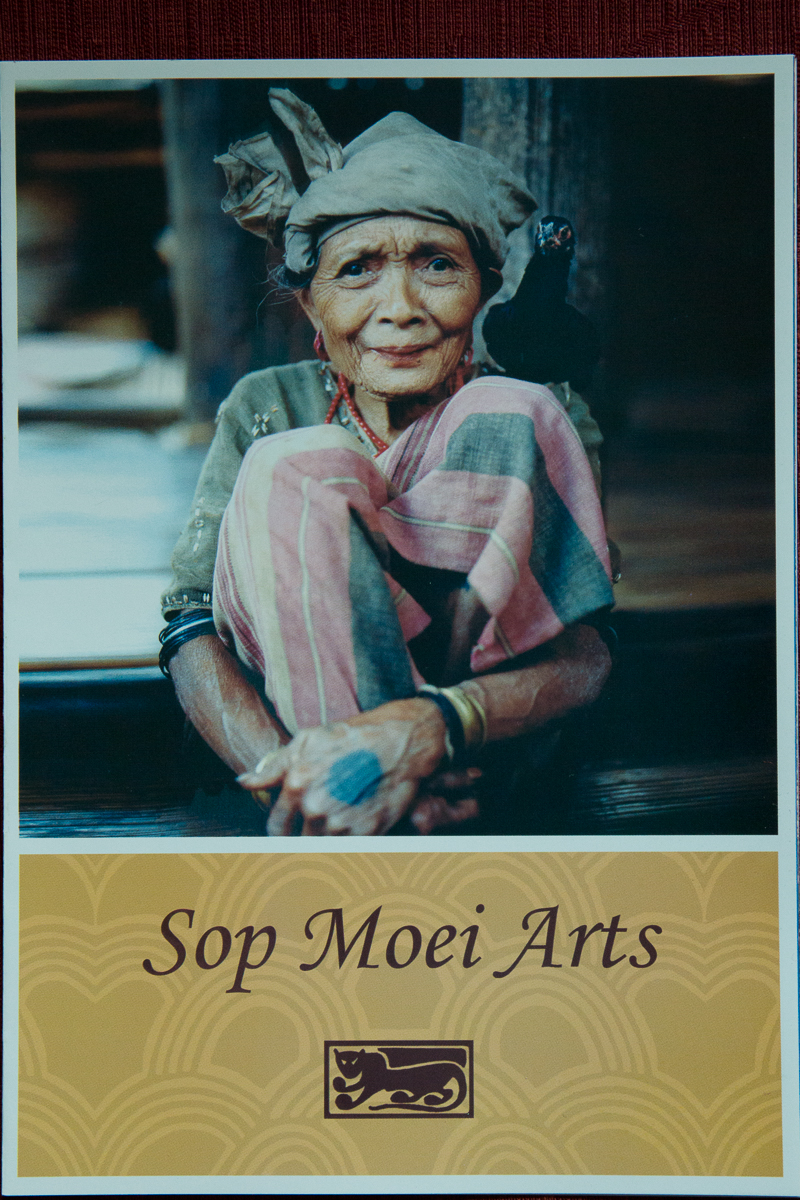 But, after several years, he realized that the real cause of malnutrition in children in this region was poverty. So, like many social entrepreneurs, he embarked on a journey of finding the assets possessed by these communities and then turning those into economic opportunities. In the end, retail shops in Chiang Mai and Bangkok, targeting the tourists looking for uniquely beautiful products from Thailand, created the financial engine to lift these communities out of the cycle of poverty and malnutrition.