October 19, 2008
I was just able to attend an exciting conference in Vancouver, ConEx, the Conservation Learning Exchange. It was organized by The Nature Conservancy, but had folks from many of the other leading groups.

For me, it was a chance to meet practitioners using our Miradi conservation project management software. Right before I went to the conference I received a copy of the Proceedings of the Appalachian Salamander Conservation Workshop, held this past May. And sprinkled throughout the report were graphics clearly from our Miradi software! 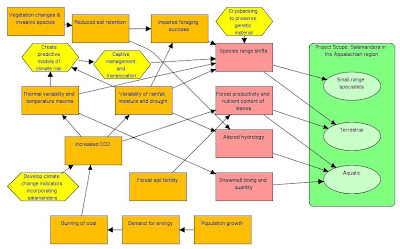 While at ConEx, I had the chance to talk about our approach to agile, user-centered development. Jim Patell of Stanford's Business School (and the d.school there) gave his pitch for similar principles in his extreme design for affordability class: it was cool to see an academic approach so grounded in reality and making a difference!

At the end of the day, I was part of a meeting of leading conservation techies talking about how to share information among different groups. There is a strong interest in having access to information about how other groups addressed similar problems in conservation (failures being at least as valuable as success stories). TNC has put a stake in the ground with its new ConPro, a web-based conservation portal with almost 1000 projects already in it. The ConPro and Miradi teams have been working to make the connection between the two systems as smooth as possible: we were demonstrating an early version of this at ConEx.

Sharing information among competitors is always difficult, and delicate. Since these groups are all connected with a common mission around the environment (and are nonprofits), we don't have anti-trust issues! Still, the problem looked very similar to the one Benetech often sees in the human rights field. I'm hopeful that we can design tools to make it easy to share information while designating certain data as being confidential to the group creating it. You can just imagine the power of having the sum of the experiences of the environmental movement rather than isolating those experiences and making the same mistakes over and over.

There's no substitute for getting into the middle of a problem with a bunch of smart committed people. Hope we can continue to do more and more for the environmental movement!
biodiversity ConEX conservation Miradi salamander TNC Vancouver