Standing Committee on Copyright and Related Rights at WIPO

June 21, 2010
I'm here in Geneva for the 20th Standing Committee on Copyright and Related Rights meeting. This is the international forum for discussing copyright issues, and it is the body considering the Treaty for the Visually Impaired (TVI). 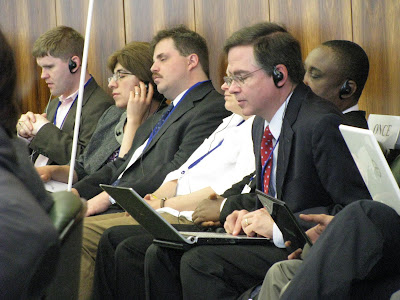 Jamie Love of KEI took the above picture of ACB's Eric Bridges, NFB's Scott LaBarre (and his wife Anahit Galechyan) and me at the meeting: I was busy tweeting what I was hearing at my Twitter handle of @JRandomF.