June 01, 2010
I’m on the plane heading back to the U.S. after my first visit to the country of Qatar. It was a lightning visit of only two days (Sunday and Monday), with a focus on attending the World Economic Forum's Global Redesign Summit 2010 (the GRI). The government of Qatar hosted the conference, and underwrote travel and accommodation. This meeting was a follow-up for me from my attendance earlier this year at the main WEF meeting in Davos, where I presented my proposal as part of the GRI. 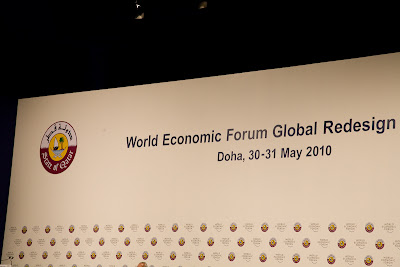 My proposal was on ensuring that all of humanity benefits from the incredible knowledge and technology. We need to encourage limitations and exceptions (like the one in the U.S. that makes Bookshare possible) and open licensing terms, so that people who the market will fail to address get the benefits of our incredibly rich and expanding knowledge base. One famous example of this approach is the affordable licensing and thus wider availability of drugs to combat HIV/AIDS in the developing world, which has literally saved the lives of hundreds of thousands, if not millions, of people. Another Schwab social entrepreneur, Richard Jefferson of Australia-based CAMBIA, spoke on behalf of greater transparency in patent databases as a crucial start in realizing greater access to the knowledge embedded in patents. As he pointed out in Doha, top companies rarely publish in scientific journals, compared to the amount of know-how they disclose in patent applications. James Moody, also from Australia, presented a concept for a Global Social Responsibility license focused on humanitarian applications of patents and technology. 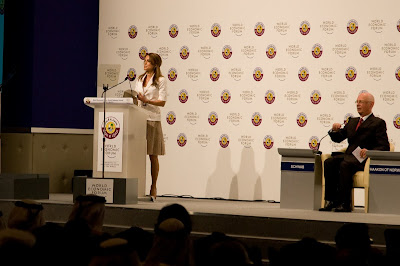 Queen Rania of Jordan, Klaus Schwab of the WEF
The other session I really liked was the one on education. They were well set-up by Queen Rania of Jordan, who extensively advocated for education in her plenary speech the first day of the conference. One of their recommendations was that there be a venture capital fund for investing in education. I was able to mention the Venture Capital in Education Summit that I’m attending in New York next week. StartL, a new education VC fund backed by a number of leading American foundations, will be launching there. 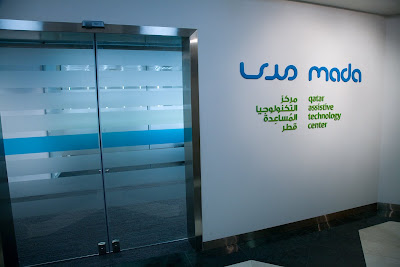 Since the conference didn’t get formally going until noon on Sunday, I had the chance to squeeze in a morning visit to Qatar’s ICT Ministry. They are launching a new center for assistive technology, the Mada Center on today: Tuesday June 1. Mada means "horizon" in Arabic. I got a preview of the state of the art equipment on Sunday morning. I was glad when they agreed to host me: it turns out that Sunday in Qatar is the first day of the work week. The team at the Mada Center is really dynamic, and excited about expanding the reach of assistive technology in Qatar and the region. We talked about bringing English language Bookshare to Qataris with print disabilities, and our discussions quickly went to what it would take to truly serve Arabic speakers in Qatar and around the world. We’ve just added our first books in Tamil and Hindi (two national languages of India), and so it was fun to brainstorm about the possibilities. The coolest demo was of a high quality Arabic text-to-speech synthesizer. I could see that the adaptive technology possibilities for Arabic are both real and exciting.
I also personally delivered the business cards of Abbas Abbas, a blind Ashoka social entrepreneur, who focuses on serving the needs of Arabs with disabilities in Israel with his AlManarah (Lighthouse) Association. I had met Abbas at the Social Enterprise Alliance Summit/World Forum in San Francisco. Lisa Nitze, the new CEO of the SEA, had made a point of connecting the two of us. And, I had promised Abbas to connect him to the Mada Center in Qatar. There is a tremendous need to expand accessible content in the languages that most people with print disabilities around the world use.
blind GRI Klaus Schwab Mada Nitze Qatar Rania SEA SEA10 SEWF10 Social Enterprise Alliance Social Enterprise World Forum WEF