Notes from The Inauguration 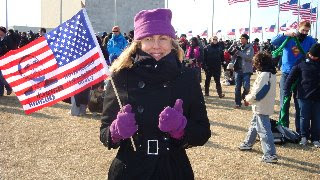 I watched a person in a wheelchair the other day navigate a tricky curb cut while crossing the street. The young man moved along skillfully without the need for assistance, but the scene brought back memories of a day in January when I accompanied a friend in a wheelchair to inauguration of President Barack Obama. As Benetech’s Communications Director, I support the team that maintains Benetech’s Bookshare library for readers with print disabilities. But our adventure at the inauguration gave me an even greater appreciation for the challenges that people with disabilities encounter and the support that exists to meet these needs.

Ignoring recommendations by organizers that disabled people not venture into the dense crowds and frigid weather expected on inauguration day, my friend Steph summoned me and three other girlfriends to Washington D.C. to make sure that she could attend the event. We knew it would be a long day of walking and rolling to get Steph from her apartment in D.C.’s Adams Morgan neighborhood to the National Mall to watch Barack Obama become the 44th president of the United States, but she was determined to witness history.

So early that cold morning, we wrapped Steph in a blanket, bundled her into her wheelchair, and set off on an epic 12-hour journey through the densely packed streets. Taking turns pushing Steph’s wheelchair, we navigated past tall curbs and rough pavement, over frosty lawns, through security checkpoints, and around a deafening fleet of police vehicles. In some places, the crowd was so overwhelming that we held hands in front of Steph’s wheelchair and pleaded with those around us for just enough space, please, to roll forward safely without being pushed over.

"Wheels coming through!" we shouted and almost without exception, every single person turned, smiled and made way for us. By the time we arrived at the hilltop at the base of the Washington Monument, it was clear that the gathering itself, not the official proceedings, was the main event. Being present to watch the first African-American become president of the United States transformed all of us and summoned the better angels of our nature. Even crushed together on an icy January morning, we the people treated each other with remarkable tenderness and mutual respect. We were all proud to be Americans. 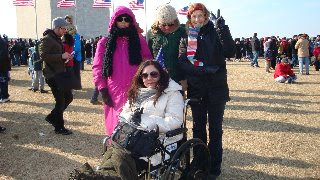 The crowd on our hilltop danced to keep warm and cheered wildly when President Obama finally appeared on the jumbotron TV screens. We imagined that Obama’s address and the stupendous view of 1.8 million people spread out from the Capital to the Lincoln Memorial was the highlight of the day. But that moment took place as we were leaving the National Mall weary and chilled to the bone. Wedged in a surging crowd and trapped between two cyclone fences, we approached a section of fence that had been torn to the ground. The man in the wheelchair ahead of us became caught on the fence and began tipping perilously before his wheelchair was unstuck by friends.

Sensing that we could not maneuver over this barrier, the people around us bent down and lifted Steph and her wheelchair into the air. She was frightened for a moment because she knew that her safety was in the hands of strangers. We held our breath too, but our new friends carried Steph and her wheelchair for twenty-five feet over the fence and surrounding tree roots and set her down gently. Wow. What better metaphor for the sense of collective purpose and determination that we all felt that day. 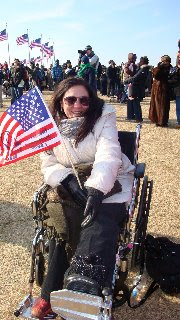 Those around us on the long walk back to Steph’s apartment were no less kind. We arrived safely, numb with cold, but reminded once again that disability is no barrier to adventure and a great inspiration for creative problem solving and moments of grace.
accessibility inauguration Obama steph wheelchair