To Dubai on an Emirates Airbus 380

November 15, 2008
My current business trip started by heading for Dubai, United Arab Emirates. I had been invited to attend the Global Agenda Council meeting organized by the World Economic Forum. It was easier to say yes than usual: I'd never been to Dubai or the region, and the government of Dubai and Emirates airline offered to fly me there business class! 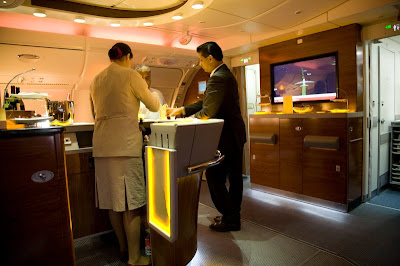 I was stunned when I found out in New York that the plane I was boarding was the new Airbus A380, the massive, double-decker airliner. The entire second floor is first and business class, and the first class (which I didn't get to see) is famous for having showers. The experience was wonderful, although I must admit I slept soundly for at least eight hours. 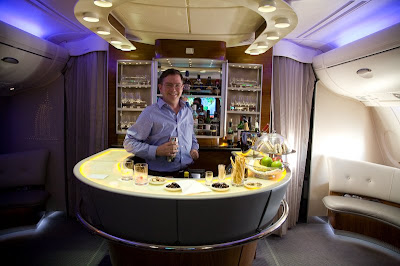 When I got up, I hung out in the bar taking pictures (of course). I had slept through the night and into the late afternoon in the Middle East. We flew over snow-capped mountains in Turkey. 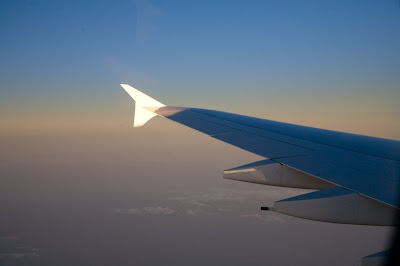 I was surprised a little later to realize that we were flying over Iraq. It seemed ironic, to be encased in this latest and most luxurious flying conveyance, drinking fine wine and eating good food, while Iraqis and Americans are still dying and struggling to bring peace to that troubled land.

Flying down the Persian Gulf, alongside Iran's coast, we arrived in Dubai. 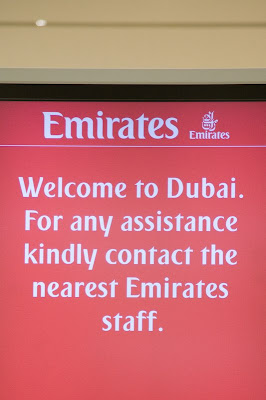 I headed to my hotel to get some sleep before touring the Emirates on the day I had before the Council's started meeting.

My full set of pictures are on Flickr: Dubai, UAE, Oman and Airbus 380 - a set on Flickr
A380 Dubai Emirates

Many of you know Rami Rabby, who I call the "Father of the CRPD" . Rami, who was on our Board of Directors at IIDI, was serving as a diplomat at the US mission to the UN in NY, at the end of 2001, when he phoned us saying that Mexico was trying to present the proposal of a Convention but they were facing enormous resistance and discouragement, specially by the " powerful countries of the North", and suggested us to get support letter from NGO, DPOs and as many people as possible, from across the globe to be sent to the Mexican Mission, to the UN Secretary General and for all the missions.

I'm sure many of you will remember receiving our request and sending a huge number of support letters within days to the UN. I'm also sure that this contributed a lot for the decision of the General Assembly to consider a process of a Disability Convention at that time.

Unfortunately, Rami was assigner to Asia at that year and could not follow the process, at least in person, with us, as we would have greatly appreciated. Rami is now retired from the US Department of State and back to his native country, Israel. Of course, he is retired as a US diplomat but he clearly remains the great advocate that we all know him for!

I'm copying to you his message below, that I consider of the interest of all of us. Rami has authorized us to share with as many people as we may think could help advance this issue.

Inclusive Tourism and travel has been as issue of interest of many of us. So, I hope you can make good use of Rami's story. Suggestions are welcomed!

All the best,
rbb

________________________________________________________________
> Avraham Rabby Wed, Oct 22, 2008 at 6:26 PM
> Draft To: LIUJunyi
> Daer Ms. Liu Junyi:
>
> Thank you so much for your letter responding to the letter I had sent
> to President Hu Jintao.
> I am afraid we are not talking, here, about an "individual incident
> that doesn't always happen to all disabled persons." The basis for the
> Dragonair incident was a company policy by Dragonair designed to apply
> to all blind passengers, not just myself. Since no other Chinese
> airline seems to have the same policy, Dragonairall blind and
> otherwise physicsally disabled visitors use the cable system, not just
> myself.
> I did not send my letter to any government authorities in Hong Kong
> or China, since it was extremely difficult to obtain the necessaary
> email addresses. Therefor, I should be mosst grateful to you would
> work to persuaid both the Dragonair management and thheauthorities at
> the Great Wall to change their policies and adopt and more enlightened
> posture to people with disabilities in line with the Intetnational
> /Convention On Tthe Rights Of People With Disabilities which was
> ratyified by the Peoples Republic of China on August 1, 2008.
>
> Sincerely,
> Avraham
>
>
6:18 PM