Showing posts from July, 2010
Show all

The 20th Anniversary of the Americans with Disabilities Act 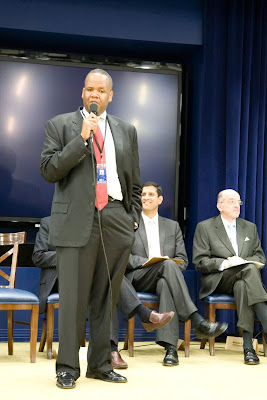 This has been a really exciting week in Washington, DC, with the focus of today's 20th anniversary of the Americans with Disabilities Act. It's hard to imagine a world without the ADA, which was passed during my first year in the disability field. It became a model of civil rights legislation for people with disabilities, and I'm sure paved the way for the UN Convention on the Rights of People with Disabilities. Last week there was a strong technology focus in the events: I was invited to an event at the White House (actually, the Old Executive Office Building) to hear from senior leaders from the Administration make announcements and talk about the power or technology to help people with disabilities. Kareem Dale, the President's senior disability advisor, was the master of ceremonies, and he got the federal CTO and CIO , an FCC Commissioner, the Assistant Secretary of Commerce overseeing the broadband program, and a senior federal procurement policy guy there. Ka
Post a Comment
Read more
More posts