Showing posts from April, 2013
Show all

April 20, 2013
Earlier today, I attended the American Foundation for the Blind’s (AFB) National Leadership Conference in Chicago where I received the 2013 Migel Medal . The Migel Medal, often called the highest honor in the blindness field, is awarded annually to one or two individuals whose careers exemplify exceptional accomplishments in the field. It was named for the first board chair of AFB, M.C. Migel, whose experiences with blindness caused during World War I, led to him helping start the Foundation.  Helen Keller, who worked for AFB for many years, was on the original award board for its first twenty years, starting in 1937. The other recipient this year was Kay Ferrell, Professor of Special Education at the University of Northern Colorado in Greeley, who won the Medal for her tremendous work with and on behalf of children and youth who are blind and visually impaired. I’m honored to join Kay in receiving this prestigious award and deeply grateful to AFB for its recognition. Remarks Her
3 comments
Read more

April 10, 2013
This post originally appeared as part of an online debate about How Big Data Can Have a Social Impact, which the Harvard Business Review Blog Network hosted jointly with the Skoll World Forum on Social Entrepreneurship . Right now I'm in Oxford, England, for the annual Skoll World Forum! Big Data is all the rage in Silicon Valley. From Facebook to Netflix, companies are tracking and analyzing our searches, our purchases, and just about every other online activity that will give them more insight into who we are and what we want. And though they use the massive sets of data they collect to help create a better experience for their consumers (such as customized ads or tailored movie recommendations), their primary goal is to use what they learn to maximize profits. But can Big Data also create positive social change? Many activities in the social sphere also generate lots of information. Massive amounts of data are collected on the pollution in our cities and the changes in our
Post a Comment
Read more

Promise and Peril: Martus for Human Rights in Burma 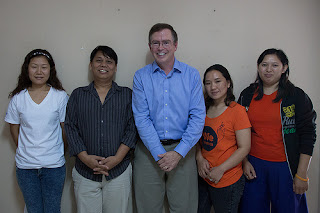 I recently had the pleasure of visiting one of our longtime Martus partners in Thailand, The Network for Human Rights Documentation – Burma ( ND-Burma ). It was so gratifying to see firsthand how Martus , a free and open-source software tool developed by Benetech, is empowering people to be the change they wish to see. Martus enables human rights workers to securely document and organize information about violations in a way that protects those who would face violence and repression for telling their stories. Jim Fruchterman with ND-Burma members In the years since the 1988 suppression of pro-democracy demonstrations, the military junta in Burma has committed many thousands of human rights violations, including killings, torture, forced displacement, rape and political imprisonment. ND-Burma, a Thailand-based coalition of over ten human rights groups, has been collecting narrative testimonies from victims and witnesses of human rights abuses by the Burmese regime. We have exten
Post a Comment
Read more
More posts