March 08, 2008
Micronesia left quite an impression on me. It's great to go to completely different places, spending time learning about history, politics, issues and culture from new perspectives. I think it's one of the great perks of my job, working in the nonprofit sector. Plus, the people I visit give me the benefit of the doubt that I'm not an ugly American. I try hard to return the favor by being respectful: it's not hard given my high degree of interest and curiosity, and the dedication of the people I met. 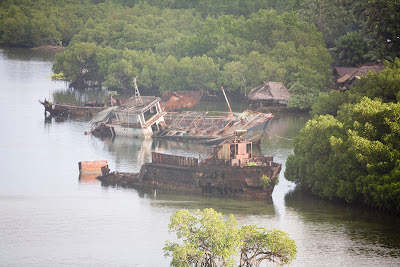 Something that made a big impression on me were the wrecks. The first thing I saw from my hotel balcony were wrecked ships in the harbor below. I couldn't find out much about them, other than that they were relatively recently wrecked (don't know if that means ten years ago or thirty). 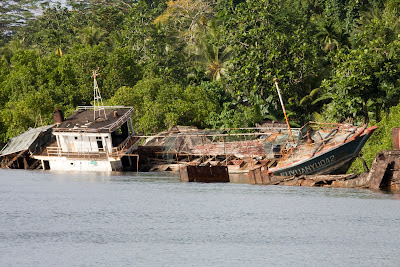 Apparently, typhoons are a big deal in Micronesia. Guam has special building codes for typhoons, kind of like California's earthquake-inspired building codes. 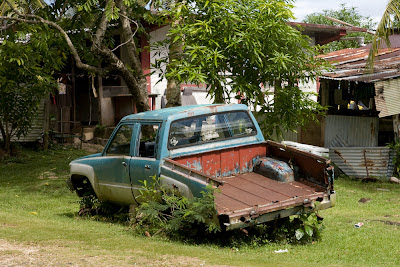 Waste disposal is hard on these tiny islands. On most of the islands, you could see wrecked cars left more or less where they expired. Unlike on the mainland, where there is demand for scrap metal (and the ability to process the metal), I have to assume the economics don't make sense. 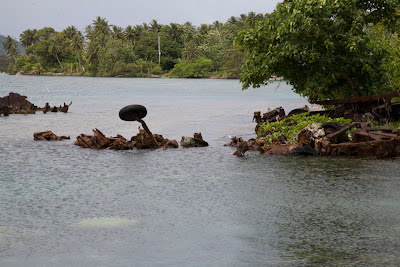 Of course, much of the wreckage is left over from World War II and its immediate aftermath. The Marshall Islands are still suffering as a results of atom bomb tests. Pohnpei was a Japanese base, and I got to climb all over wrecked large gun emplacements and ruined bunkers and tunnels. Chuuk Lagoon was the naval base for the Japanese in the region, and has more than fifty sunken ships. On my Saturday morning in Chuuk I got to tour ruins and snorkel over a sunken Zero fighter in 20 feet of clear water, looking like it could have landed there five years ago.

I also learned about traditional drugs that have important cultural overtones. On Pohnpei, they pound the root of a pepper plant with water and create a muddy paste called sakau. It's supposed to totally numb you and make you mellow. There's a whole ceremony around making and sharing the beverage. I was tempted, but Donna let me know she expected me to be functional for all the meetings that had been planned. Mike Terlaje had tried it and hadn't gotten too much effect from it, but the water used seemed to be the likely cause of a couple of unhappy days following. 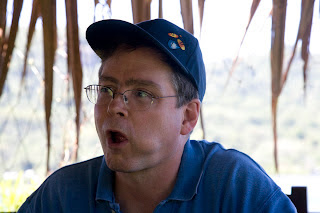 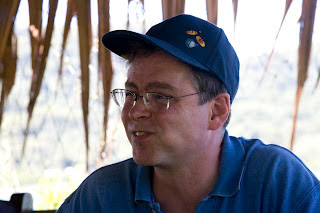 Betel nut is another mildly stimulating drug: it's actually a palm kernel. I first tried the fresh version, and found it unpalatable (pictures above). But the dried version I had on Guam was better, and gives you a warm feeling. It was kind of tannic and bitter. I don't want to overstate the drug aspect: this is a natural plant analogous to something with a lot of caffeine. 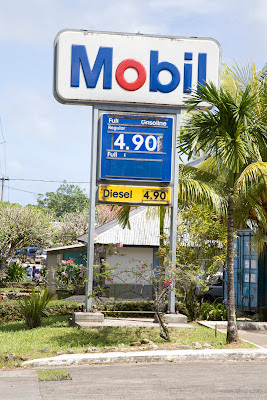 Fuel was very expensive on the islands. There were court battles over fuel deals, and I was told that Chuuk State's financial problems was limiting access to fuel. Donna noted a big decrease in the number of people on Weno island in Chuuk, and this was attributed to the cost of fuel reducing the practicality of coming into the big city by motor-boat.

Beef was three times the price of tuna in the restaurants on Pohnpei. For $8 I had a tuna sashimi appetizer that had nearly a pound of raw tuna in slices three times thicker than I've had before (and it was very tasty!).

Micronesia is hard to sum up in a few words. It's incredibly beautiful. I was impressed with the people I met. It's at the intersection of a traditional society changed by its interaction with the Spanish, the Japanese and the Americans (interactions that were not very positive most of the time: actually, sometimes the abuse was totally appalling). The U.S. is committed to financially supporting these states that we dominated following World War II, which affects the political culture significantly. I saw aspects of American and Japanese society overlaid on a societies trying to preserve their traditions and languages. Some of these interactions lead to disabilities, such as the children blind from Vitamin A deficiency, which didn't happen before rice supplanted traditional foods.

The Benetech team and I are excited about helping these students with content in both the local language and English, and hope that we can do worthwhile work in supporting the educators of Micronesia to serve students with disabilities. At least two of us will be back this summer to do training and follow-up. I know I'm looking forward to a chance to go back. 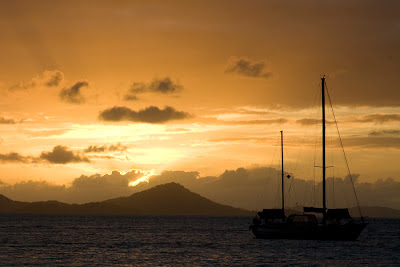 Unknown said…
The Truk/Chuuk islands was the Pacific Japanese navel fleet base... the same as Hawaii was for the United States Navy. the huge anchor float in the middle of the lagoon was moorage for the Yamamoto Battleship.
7:10 PM