Dragonair Hauls Rami off the Plane

September 24, 2008
Our flight from Hong Kong to Fuzhou on Dragonair was made much more interesting when we had a ringside seat on a disability rights demonstration! 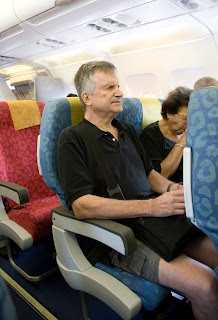 Rami Rabby is famous in the American blind community as the first blind foreign service officer working for the US State Department. It wasn't easy for him: he had to sue them because they wouldn't hire him even though he was highly qualified.

It might come as no surprise that Rami is attuned to discriminatory practices and willing to stand up for himself. Rami had been assigned a window seat even though he wanted to sit on the aisle like your typical frequent flier. So, he asked to switch seats with Jimmy Young (son of Hadley School's CEO, Chuck Young). 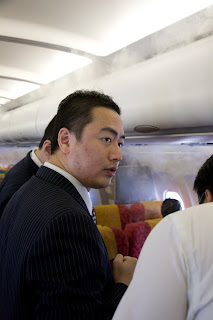 This caused some consternation among the airline staff. Apparently, they have a little manual that says blind people have to sit in a window seat. So, they asked Rami to move, claiming this was standard operating procedure (which it isn't, since we'd all travelled around the world as blind people or with blind people and this was a new one). They tried about ten times and about ten different ways. Rami's basic answer was that it didn't make sense to him and that they should explain why there was such a policy. They tried to pressure him by telling him he was delaying the flight, and Rami said that he was unembarrassable. 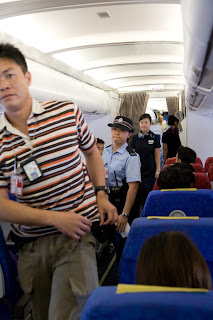 Gradually, more and more folks came onto the plane. Local airline managers, plainclothes and uniformed police, etc. The pilot said it was a regulation of the local aviation regulator (unclear if he meant Hong Kong or China). I asked if they had placed all of the Paralympic athletes to sit in window seats, but didn't get an answer. 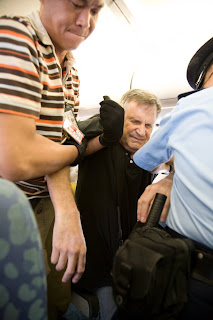 Finally, the captain decided to call in the police and have Rami hauled off the plane. I was busy taking pictures, and my companions thought I was nuts. Of course, I felt Rami was taking a much bigger risk! 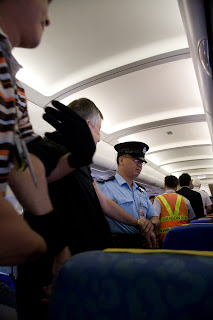 Rami had obviously studied nonviolent resistance. He never raised his voice, but didn't cooperate with being hauled away. And, our plane got going almost an hour late. 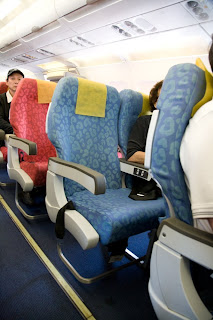 Of course, we were worried about Rami being stuck in Hong Kong as we jetted off to Fuzhou. But, Rami was on a flight two hours later on China Eastern Airlines, which apparently doesn't have the same rulebook as Dragonair did! So, it seems to be just one airline's discriminatory practice in its zeal. This issue is probably related to the exit row seating requirement in the U.S. that keeps children and people with disabilities from sitting in an exit row (which one major blind organization fought unsuccessfully ten years back). But, this wasn't an exit row. So, it wasn't clear if they simply wanted disabled people out of the way in case of an emergency or what the reasoning was. I had to admire Rami for his willingness to stand up for disability rights.
airline blind China discrimination dragonair Hong Kong seating

Feel free to not publish this but I seem to have misplaced your card and email.

I posted as small thank you today for standing in solidarity with Rami. It was C.T. Vivian, one of Dr King's organizers, who pointed out to a group of us university leaders once that what the unexpected supporter does for the marginalized from within their context of privilege that takes a special kind of courage - and yields a special sort of result.

Thanks. Here's the link:

Blake Watson said…
Ridiculous technicality gone too far. It happens all the time, unfortunately.
11:51 AM

Unknown said…
Hi, I am Sebastian, a friend of Rami; we had met in New delhi when he was posted there and i was studying. As the first blind employee of the African Development Bank in Tunis, I had travelled the world quite a bit, e.g. my seeing eye dog has visited by now 43 countries. However, you cannot imagine how much hardship, discussions, fights and even arrest travelling with a seing eye dog can get you! My reccomendation for anti discriminatory fights like this is: get them thinking by squeezing their brains ... on which they place their behinds ... in clear: make any company accountable by financial compansation claimes & you will have their brains in your hand! I am very interested to hear any follow up on this one. Bravo Rami!
7:20 AM

Unknown said…
I am the daughter of Gwen Williams who has much fondness for Rami. She told me of his plight in China and consequently I have read your photo journal of the events that took place. I have never met Rami but I am overwhelmed at his strength and persistance with Dragonair over this highly discriminatory and demeaning matter with the seats. I am amazed that people can treat others with this level of ignorance. I am disgusted at their treatment of him on the plane. I admire him so much for sticking up for himself but nobody should have to be in that position in the first place. Who are they to say who is more deserving of rescue in an emergency situation?

We should all be entitled to the seat we want in life. Or at the very least have a reasonable justification when we can't. This behaviour was inexcusable. when will people learn?

swisswuff said…
A very relevant aspect appears to be that the flight afterward was almost surely not one bit safer, nor was it more on time.

In other words, Dragonair willfully and against rational argument wastes the resources of their stakeholders which includes their passengers. i would like to emphasize 'waste' (not 'risk').

Such practices do not belong to a modern world at all. They are based on discrimination, stupidity and fear. If that is the public image Dragon air must perpetuate in public we should see to it that as many people as possible know about it and can make an informed decision whether at all to travel with that airline.
1:33 AM