April 22, 2010
The ten days in the UK amazed me with the power of social media in my life. As a tech guy who also plays a social entrepreneur, I often get asked by my SE buddies about what are the practical use of a tool like Twitter. I moderated an excellent session at the Skoll World Forum last week on using social media for more social mission impact. But rather than making this an extensive essay on the glories of social media, I just want to give some examples from my UK trip, just from Twitter. I spend less than 15 minutes a day on social media, but the payoffs are huge!

BBC tracks me down!

I quickly get a direct message from Tim Weber, the Business Editor of the BBC News website. He invites me to come by the BBC in London the next day for a tour of the newsroom. Via Twitter, we set the time and he gives me the Tube stop (White City).

The next day, I'm getting a full-on tour of the BBC newsrooms, a preview of the new BBC News website design, an in-depth demo of the content management system including how to move approved stories around in response to user interest, a graphical overlay on these pages showing top links being clicks, and so on. Of course, I was able to tell Tim the latest about Benetech and visiting the Skoll World Forum. He responded by showing me a series BBC was doing on social entrepreneurship, covering many of my Skoll buds. 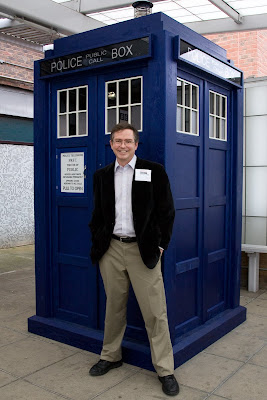 And, as a huge Dr. Who fan, I had Tim take a picture of me in front of the Tardis (Doctor Who's time travel machine disguised as a standard old English police box).

As it turns out, BBC journalist Peter Day did an extensive radio interview of the three social media panelists (and me) at the Forum in Oxford. Coincidence? You decide!

Throw my hat into the ring and speak at TEDxVolcano.

The airports in the UK closed near the end of the Skoll Forum, and many of us headed off last Saturday for London to ponder our next moves. Nathaniel Whittemore (the Change.org social entrepreneurship blogger) pitches June Cohen of the TED conference to pull together TEDxVolcano impromptu conference for the next day: Sunday! Since I'm following the Skoll World Forum hashtag (#swf10) on Twitter, I learn about the conference as it gets pulled together, scheduled, grab tickets, etc. 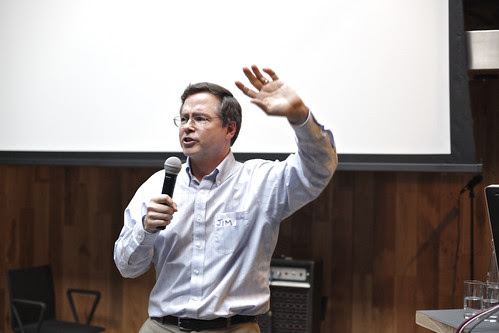 Photo credit: Robert Leslie via TED
Via Twitter, I "throw my hat into the ring" for TEDxVolcano and quickly get invited by Nathaniel to be a speaker, joining the likes of Jeff Skoll, Sally Osberg, Matthew Bishop (US bureau chief for the Economist), Larry Brilliant and other Skoll refugees. Without Twitter, I wouldn't have been able to find out about this and make the offer. 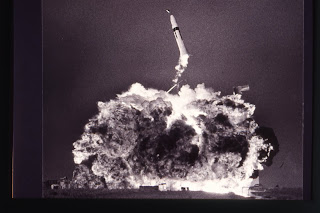 So, I got to tell the TEDxVolcano attendees my personal experience of my favorite explosion, the Percheron Rocket: my first job out of school. I thought it was apropos of a volcano theme. The next day, I find out via a tweet from Lara Long, Benetech's literacy product manager, that my talk is online at the TEDxVolcano livestream, at about 46 minutes in.

Working the exit options to get home.

By following the #swf10, #tedxvolcano and the more general #ashtag hashtags on Twitter, I was treated to a steady stream of website links and stories about the airport closures and the volcano. Offers of shared buses and even possible charter flights flew around. Social entrepreneurs are a resourceful bunch: every option was explored and most were done by somebody! The best websites for getting current flight data came via tweets from people I respect. I used these websites to figure out which flights were likely to actually still be departing on Wednesday, the day flights resumed. I got to the airport, talked my way onto the first California-bound flight on American Airlines, and then tweeted about how I did it (and that there were empty seats) to the rest of the world, but especially my Skoll Forum community.

I'm a huge email user, but email wasn't the solution. It was too slow. I wasn't going to spam every person I know in the UK about my arrival. But, someone like Tim Weber had decided to check tweets from people like me he chooses to follow on Twitter. I learned about TEDxVolcano and became a speaker within a couple of hours: a process for normal TED or TEDx conferences takes weeks. And, by using Twitter with the right hashtags, I was able to learn from people I knew and many I didn't know about what was happening on the ground in London, Paris, Madrid, Rome, Casablanca and so on, all from people who shared my interest in finding ways home.

I wouldn't want to count on Twitter to replace email or the web: it's just the wrong tool for the jobs those tools do better. But, during the last ten days, I learned what it could really do for me. Connecting with people important to my mission. Opening doors to speaking gigs. Solving real problems.

All by harnessing the power of 140 characters to deliver glorious serendipity!
BBC SWF SWF10 TEDxVolcano Twitter

Kate Bladow said…
Wow. This clarified the value of Twitter for me. (I was already a believer but couldn't put the reason into words.) Microblogging helps you position yourself at the right place at the right time. You no longer have to be standing next to someone on the street or on the right phone call to "be around" when the next opportunity knocks. - K
9:00 AM